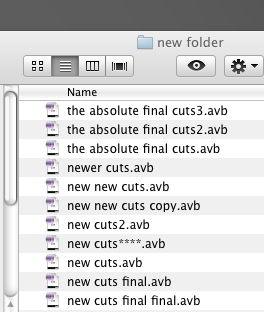 avoid edicts and proclamations in our office. It reeks of bureaucracy. But there are certain words that are not allowed to be even spoken aloud for fear they will invoke the wrath of the gods. Words like “easy” or “simple”. You know the context- “That looks easy” or “That will be simple”. It’s a surefire way for something to go very wrong. Never fails. I’m not superstitious except for my list of banished words. Say one out loud and there will be pain.

In my Avid (or any other files I organize) the same holds true for two terrible words: “New” and “Final”. Gives me the willies just typing them here. When I was an assistant I learned pretty quickly that naming files with clarity helped everyone --- especially me. Naming a file “new” was about as clear as naming a file “file”. I still see it done. I get files called “rough cut -new new” or “new2”, “new 3”, “new4”. “Really new”.

I even had an agency name their commercial "New". Like that hasn't caused grief ever since. "Get me a copy of the New commercial, won't you? ", "Send that New commercial over to the stations".

“Final” is the kiss of death to any file. Name it ‘Final” and I absolutely guarantee there will be another revision beyond that one. “Final 1”, “Final FINAL”, “Finally” Grrrr.

So what do I do? I NUMBER THEM. The highest number is the latest file. Then if I go into the project later, or anyone needs to do so for me, it’s pretty clear which one I was working on last. If that isn’t clear enough I’ll label them any other way as long as it’s not a descriptor that implies this is the last one.

Best of all that number travels with the file wherever it ends up. So if a client says “I like what’s happening at the end of version #5” we all know which one we’re referring to.

Bonus points for never numbering anything with less than 3 digits. E.g. “001” instead of “1”. That way no matter what operating system or application they’ll sort in the correct order.

It’s just that eas__. Um, I mean… hopefully that helps.