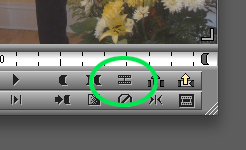 ou say)…what the heck did that first post have to do with the Avid? Well, specifically? Nothing. And everything. But I get the point. So today’s tip is small, useful and almost entirely Avid related.

So, when you’re cutting and cutting and cutting and the video and audio are multiple tracks things can get rather complicated to keep track of. And keeping everything in sync is daunting…but critical. You don’t want to slide or trim a single track down somewhere close to the start or in the middle, keep cutting away for a while and then hundreds of decisions and adjustments later you discover that everything at some point went out of sync.

So what I like to do before I make any changes to the cut is to… well, first duplicate the cut. (Duh?) But then select all the tracks…move further down the timeline and choose a fairly simple group of clips and hit the “Add edit” button, which essentially scores a single line down all the tracks. In fact I like to do this a few times right there in the timeline. It doesn’t destroy anything, just makes a line.

Now when I do my edits, slipping this, sliding that, trimming this & that…I can go to the lines I made and see where things have shifted out of sync and by how much (if they’ve shifted at all). Then I can go back and nudge th 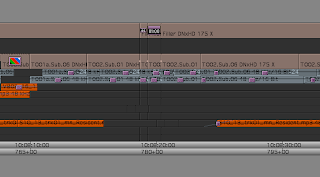 e other tracks up to get everything to fall back in sync again. No worries.

Then if I want I can select all the tracks and choose “remove edits” which I have mapped to my timeline bar, and everything is all clean and in sync.

Now I don’t use FCP but I imagine there’s a similar tool you can use to do the same thing: markers, perhaps? Even in the Avid I could use Locators but it’s not as fast to apply nor as fast to remove as adding a null edit point.
Posted by Jeffrey R. Fish at 7:18 AM