006- Back when Avid was just an Avid editing tool the first software version I used was 4.5. I know what you’re saying -- there is no 4.5. (not yet, anyway) Well, I’m talking about way back in 1993. I was handed my first Avid suite. It wasn’t wired up, it didn’t have any manuals and I had no tech support. Best of all I had a week to learn it and teach it to my senior editor because I was going on a honeymoon. You see we would be parted as editor and assistant for the first time in three years thus forcing him to work with one of those trendy “computer” things without my help.

Anyway…the thing about 4.5 is that it had no layers. Think about that. Avid software as an A/B roll edit suite. Yuck. You had a title tool and that’s it for your graphics ability. Still, it totally blew the doors off of tape-based editing.

Then along came 5.0. It had 24 amazing layers and 23 layers of potential deeply “nested” layers inside those layers. For some reason I understood how layers and nesting worked right away and why it was so cool. It was why I slid so well into After Effects too. Precomps acted very much the same way. The ability to wrap a bunch of media into a sub-package and then affect that wrapped item as a whole was very powerful.

Flash forward to today. Photoshop is my right arm. I constantly reach for it. I love/prefer designing my type in is PS because of the incredible flexibility and non-destructive treatments to type that you can do.

When I first started importing Photoshop layers into an Avid bin, I was blown away by how simple it was to layup a bunch of type and then for the Avid to recognize those layers independently; all while keeping the naming and file order. Awesome.

Then, as Photoshop has a tendency to do, the layers got a lot more complicated with non-destructive shadow, beveling, gradients, etc. Avid couldn’t keep up (I don’t blame the fine programmers at Avid). So I resorted to creating flattened versions of layers in the same file. I’d label them “flat” so I knew which ones to import.

Problem is if I wanted to make a small change it was a big pain in the ass to modify it and replace the flattened layer or keep track of multiple flattened versions. Files got bloated and things bogged down. 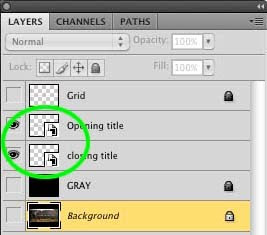 Then, like a big slap in the head I realized I should be using “Smart Objects”! Smart Objects are to Photoshop what nesting is to an Avid timeline. By creating my type layer, styling it and collapsing it into a smart object (like nesting in the Avid or precomping in After Effects) I could import that layer into the Avid and all the Media Composer would see is a flattened file with the effects intact. But (!) I could go back into the PSD file and by simply double clicking I could get all my non-destructive style parameters back, adjust something, close the smart object file, save the main file and batch import the same file name…which replaced it in the sequence – bam! It sounds slow but it is waaaayyy faster.

Okay, let’s chat next week about a few things I’d like to see in my anniversary edition of Media Composer 4.5.
Posted by Jeffrey R. Fish at 10:11 AM