SHE COMES IN COLOURS 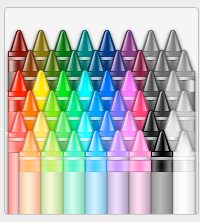 s my thirteenth blog would be my first late one. Apologies to anyone keeping score. Kudos to whomever won the pool.)

Let’s raise a cheer for the glorious montage! Film’s answer to the collage. The editor’s answer when lacking a story. A client’s answer to shoving in as much as they can in a tiny space with reckless regard to taste, pace or style. Montages: God, I hate ‘em.

But that’s not to say I’m not good at them. I am. Or at least I must be given the number of times people ask me to do them. “Y’know what we’d like, Fish? A montage. You should do one of ‘your’ montages”.

Sigh. They’re not mine. I didn’t invent the blasted thing. If I did I would have killed myself by now from the shame.

In my world, the commercial & corporate world, a montage solves a very important problem. How do you get warring & squabbling divisions, groups, parties, organizations to all agree on what should go into a video or commercial? Well, you do it with a montage, that’s how! I’ll give you an example.

I have a client that has four major divisions to its organization. They frequently come together to do a video or a commercial promoting all four pieces. Now I don’t envy the agencies set to this task. It’s like herding cats. Just getting them to agree on a logo design is daunting enough. Then four collections of footage are dumped at my doorstep. Each division wants to be fairly and evenly represented. (Actually, that’s giving them too much credit. Each wants to be represented MORE than the other. But I digress.)

I do NOT edit mathematically - but montages are the closest I ever come to it. “So here’s a shot from your group, and shot from yours, and then a shot from yours and… then yours…and back we go again.” It’s not that simple, of course. I’m still motivated my music and pace. Visually I may be compelled to put a few shots back to back from the same place to better tell a visual story (for lack of a better expression). But I’d better make up for that hoarding by ignoring that division for the next few shots. Crazy? Yup. But I manage to make something people like and keep the peace between them. Then, at the end of the day, I reach for a nice bottle of wine to drown the memory.

But how do I keep track of all that stuff? Well, the Avid Media Composer makes it easy. I colour code my clips (colour with a ‘u’, since I’m living and working here in Canada). Colour coding material according to each region allows me to instantly see in my timeline what came from where and how often. It makes the delicate balance of montages a sane and swift exercise.

No matter what the project, I consistently colour my music clips blue, my sound effects orange and my voice-overs yellow. If I need to differentiate indoors from outdoor, types of camera formats, locations or subjects I burn through my digital crayons before I’ve cut a single frame. It takes a small investment of time up front but man does it keep my head screwed on tight later. When 8 tracks of audio and 6 tracks of complex video span twenty-two minutes of content knowing what’s what makes for fast and confident modifications to my cut.

If you’ve edited for any amount of time in a non-linear fashion, you’ve probably been aware that with a timeline you gain a geographic memory where you can actually look at an area and know what a clip is without having to listen or watch it. And labeling clips with colours makes that even easier.

Lest we forget the bright fire engine red clips that scream “MEDIA OFFLINE”. Or the urine-yellow clips warning of mixed media resolutions. Even the slight shade differences between video and audio tracks make for subtle hints as to what you are moving where. Now leap across to your other monitor where you can label the background of bins so you can easily isolate your cuts bin from a footage bin with a glance rather than searching for names. 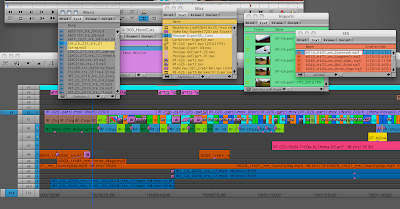